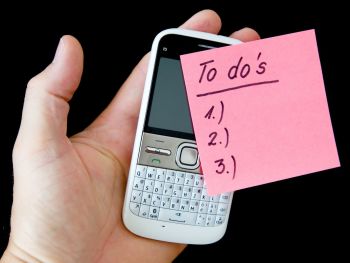 A good list avoids the overload of thinking of too many things at once, so you can focus on what you’re doing AND get the satisfaction of crossing off each thing as it’s done.  BUT what if there’s something lurking which still doesn’t get done?  My warning signal is when a ‘to do’ gets transferred from one week’s list to the next.  Oh dear.

Because you start feeling guilty.  To resent that thing for still hanging around.  To find excuses for still not doing it.  That’s when it helps to tap into a bit of imagination.  If you’ve got a ‘To Do’ that’s been hanging around for a while, this might help….

Close your eyes for a few moments, and imagine stepping into the future (however far in advance is appropriate), to experience the consequences of that thing still not done.  In detail….  What will you see, hear or touch which specifically tells you that thing’s not happened?

So if it’s not completing you tax return, you could imagine the sound of the letter box, the tearing envelope, and the exact appearance of the letter telling you about the big, fat fine.  You can imagine the screen showing your on-line bank balance, the big drop it takes as you pay the fine, and the treats you’ll have to give up as a consequence.  Make it as detailed as you can, thinking of the impacts on yourself, and on each of the other people it involves.

Now you might just find that however vivid you make those consequences, you’re still not bothered.  If so, you might be better taking the thing off your list, instead of making yourself feel bad about it still being there.

If those consequences are ones which you do want to avoid, then you’ve got the start of the motivation – you’ve got the ‘away from’.  But that’s what makes you feel guilty, and on its own, it might not be enough to propel you into action.

So now, imagine the alternative future - watching yourself, as you do that task.  Again, in as much detail as you can.  Where will you be, what will you do, what will be the expression on your face, step by step.  Then when you’ve watched yourself do it, imagine that exact same sequence again, but this time seeing it through your own eyes.  So now you’re experiencing all those steps of getting the task done.  Because it’s so much easier the second time round, when you come to do it for real.

Then get to it!

Want to get more from your thinking?  To get my weekly tips and techniques go to http://www.resolve-stress.com/weekly-my-blog